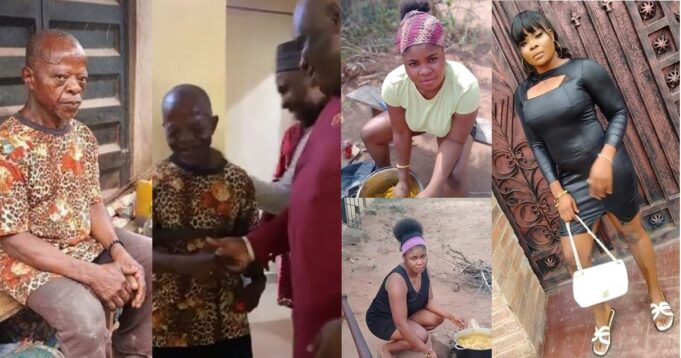 This is coming after news made rounds that the veteran actor was homeless and sleeps in shops and streets in Enugu. A photo of the actor sitting in front of a shop with what was left of his personal belongings also made rounds online.

Following which, the General Overseer of Omega Power Ministries (OPM), took to his Twitter page to announce that he was offering free accommodation to Aguba in one of the OPM free estates in Port Harcourt.

The clergyman has now fulfilled his pledge and a video showing the emotional moment the actor was ushered into his new house has been shared online.

Apostle Chibuzor also pledged to find a wife for the actor, sponsor their wedding and invite Nollywood actors to the ceremony. Watch here

Shortly after the video went viral, a young lady has allegedly offered to get married to the veteran actor in a post shared on a Facebook group, Rant HQ Extension on Wednesday, July 5.

She was quoted as saying,

“I heard General overseer OPM is looking for a wife for Kenneth Aguba , please Tell Him I (Annastasia Micheal Olamma ) am willing to marry him,i am ready to be Mrs Aguba ❤️❤️ I will love him and take care of him very well. They should come and see my people biko. I am 24 years old and i am from Enugu state,.. Aguba Deserves to marry me because I am a wife material 1000 yards,I can help him regain his sanity and I will take very good care of him and feed him well.
I can’t wait to marry my Agubabym.” AguAnna2022“

See more photos of the young lady below,