The publication of the Biography of the living Legend, songwriter and performer Innocent 2Face Idibia was announced by NET NewPaper Nigeria Limited, Owners of THENETNG, Newsroom and NECLive. 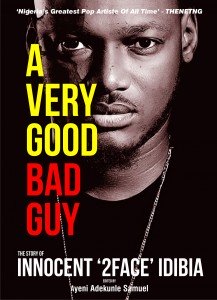 ‘A Very Good Bad guy: The Story Of Innocent 2Face Idibia’ is first of its kind for a Nigerian pop artiste and indeed, for a contemporary Nigerian musician. The project, done in commemoration of the musician’s 40th birthday, is part of the NET book series, which kicked off in April 2015.
The book’s presentation is planned to coincide with Idibia’s 40th birthday celebrations. He clocks 40 on September 18, 2015
Idibia’s biography, edited by NET publisher and 2face’s former publicist Ayeni Adekunle Samuel, is titled ‘A Very Good Bad guy: The Story Of Innocent 2Face Idibia.’
The book contains a detailed interview with 2face, lyrics and discography, views from some of those who have shaped his life and career, an insider’s journey through his life and times, as well as a collection of some of the most important articles, reviews, features and news about him since 2004.
Ayeni Adekunle Samuel, speaking about A Very Good Bad Guy commented, ‘Apart from being a fantastic musician and a wonderful person, 2Face is also a personal friend and source of inspiration; so few things give me as much joy as being able to give this gentleman some of the recognition he deserves on the occasion of his 40th birthday. These are important projects Nigeria must do for our cultural posterity. We must tell our stories and document our history. NET is delighted to compile the life stories of this cultural icon of our times so that our children and our children’s children can read it and learn. And this is the first of many to come’.

A Very Good Bad Guy: The Story of Innocent 2Face Idibia is the second in the NET Books series after the Chris Ihidero collection, Wanderings of a Rapidly Degenerating Mind.

Speaking about the book, 2Face himself says ‘It’s a really good feeling knowing that all these years that I’ve been surviving in this industry, someone has been taking note you know…compiling my story so that on an occasion like this, they will release it for the world to see. I’m really feeling the love but importantly I hope those coming behind will read and learn from my story.’

Born in Jos, Plateau State, 2Face Idibia was raised in Makurdi, Benue State where he attended Demonstration Primary School and Saint Gabriel’s secondary school. After a stint at the Institute of Management & Technology (IMT) Enugu, he dropped out to pursue a music career in Lagos in 1997.

In the same year, he teamed up with Ahmedu Augustine Obiabo aka Blackface to form Plantashun Boyz, which was later joined by Chibuzor Orji aka Faze. After achieving success with the band, 2Face left Plantashun Boyz in 2004 to embark on a successful solo career which has spawned six critically acclaimed studio albums and several local and international awards.