Reports reaching us is that of Nollywood veteran actress, Ireti Doyle’s marriage to Patrick Doyle being at not so good terms as it’s being alleged that the couple have separated.

After more than 20 years of marriage, a source close to Patrick and Ireti, have clued that they are no longer living together. According to some revelations by playground, the Tinsel actress has since moved into a new apartment in Anthony Village area of Lagos, living far away from her veteran broadcaster and actor husband and children.

The estranged couple who are yet to issue any statement are according to a source, taking respectful and loving space at this painful time. There’s also the claim that they’ve been in the rocks for a while and stopped having shared interests.

The couple have not been stepping out together, which has been strangely observed by many fans and media – when asked why they have not spotted together in recent time, Ireti, said:

“We are both busy people and you find that, in any one given weekend, we’ve both been invited to three or four different events where all three or four people are expecting to see us so we play it smart, we share it; if you’ve seen one you’ve seen the other.”

While the reason for their estranged is still kinda foggy a source has revealed to Playground that Patrick and Ireti ended their relationship after thoughtful consideration and chose to remain friends. 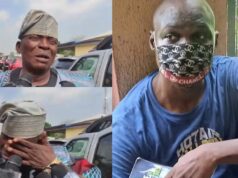