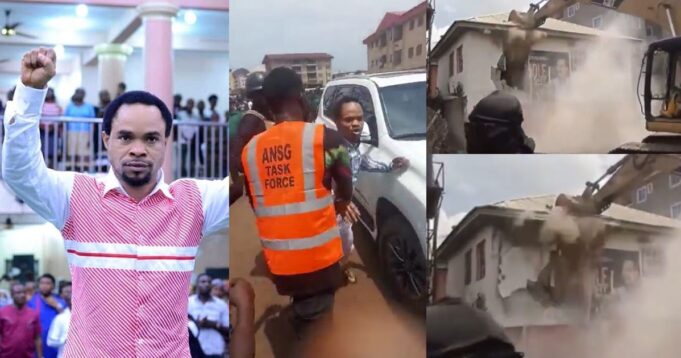 It was gathered that the church located in Bida Road, Fegge, Onitsha, Anambra State, had been marked by the state government for demolition since April 2022.

It’s said that the church was marked for demolition among over 200 other houses for obstruction and blocking the drainage way within the Fegge-Onitsha, Ogbaru and their environs.

Bulldozers were seen demolishing the building with the supervision of some ANSG task force officials in videos that surfaced online. The videos also showed the officials assaulting the man of God, hitting and slapping him at intervals as they prevented him from accessing his church building.

This comes after Odumeje bought his wife a brand new car.

Odumeje who goes around with the moniker “The Lion himself” took to his social media page to share a video of the new car he bought his wife.

In the video he shared, his wife was seen gushing over her new car. Odumeje captioned the video; “New BMW to my wife”.

In other news, Maryam Adamu, a 20-year-old student at Gombe State University (GSU), has stated that the Academic Staff Union of Universities’ (ASUU) prolonged strike has compelled her to start looking for a husband.

The young lady, in an interview with the Daily Sun, bemoaned the strike action by the union and noted that the strike has messed up her plans of graduating before turning 20.

Mariam, who is in her second year at the university, said her desire to finish her education before getting married has been completely crushed by the ongoing strike, and all she desires right now is to get married and start a family.