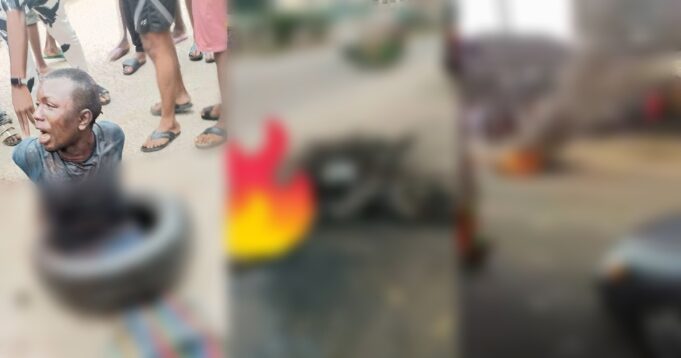 The suspects are said to be among criminals terrorizing Point of Sale (POS) operators, traders, and residents at Abayi, along Aba-Owerri Road, Afor-Ule, Umuimo, and Kamalu streets in the Osisioma axis of Aba.

According to reports, the robbery suspects were set ablaze at different locations in Aba on Sunday, July 3.

An eyewitness told Vanguard that the men were caught by irate youths after they had allegedly robbed a POS operator and some shops in the area.

“After robbing the POS operator and some shops, the robbers fled when people raised alarm. Some youths gave them a hot pursuit but they were knocked off their motorcycle by a moving vehicle. The youths caught up with them and set them ablaze; one at the opposite a Bank, others are burned at a Bank junction and Paper Mill. These boys have been robbing PoS operators and shops.Today, nemesis has caught up with them,” the eyewitnesses said.

Geoffrey Ogbonna, the spokesperson of the State Police Command who confirmed the incident to Channels Television on Monday, July 4, said the suspects were burnt to death on Sunday in an effort to escape the scene of the crime, adding that the situation caused gridlock along Osisioma.

“The jungle justice is preventing police authority to further probe the activities of robbery kingpin in the area, which has been terrorizing the residents; we don’t know their names, even the suspect that escaped,” Ogbonna said.

While condemning the incident, he warned residents of the state against taking the law into their own hands.

Meanwhile, a resident, Kenneth Tuga, who shared photos from the scene on Facebook, said five suspects were caught and burnt to death.

“Security Watch. Faulks Road Aba. If you are stealing, breaking people’s shops, Attacking POS with guns. Aba dey vex badly now. Body count is 5….not that we support jungle justice but the fact is that these guys are getting viciously mean and the people are responding in kind. We have one broken broken shop, the robbers came with RAV 4 grey SUV and stole more than 6 televisions and absconded when alarm was raised. An eye for an eye. Too bad. We no dey sleep.” He wrote on Facebook.