Home Viral US-based Nigerian man laments after he was thrown out of his house... 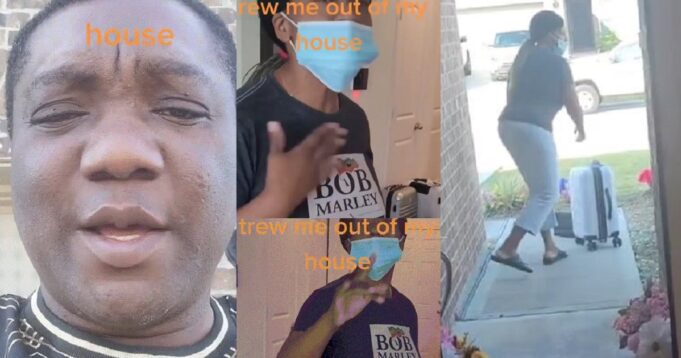 A US-based Nigerian man has taken to social media to lament after he was thrown out of his house by his wife.

In a video he shared online, the man captured the moment his ‘controlling’ wife shoved his belongings outside their home and demanded he leave so she could live her life.

Although it is not clear what caused the quarrel between them, the wife continued screaming she didn’t want to do this anymore.

“I don’t want to do this anymore. You can’t be telling me what to do. Get out of this place,” she said as she threw his bags outside the house.

The man, however, maintained his composure and persisted in questioning why she was ejecting from the house they built together.

Meanwhile, a woman has raised eyebrows online after she admitted to hypnotizing her lover with a charm to make him submissive and forever loyal to her.

The beautiful plus-sized woman took to social media to show off her Cameroonian lover, whom she simply identified as Michael, while bragging that no woman can snatch him from her.

She went on to disclose that she had locked him in a juju bottle and, as a result, he does not cheat, whereas she cheats on him with other men.

She boasted about how powerful the charm she placed on him is, guaranteeing that no woman would be able to take him away from her.