Home Viral “Beware of broke boys” – Lady laments after man who took her... 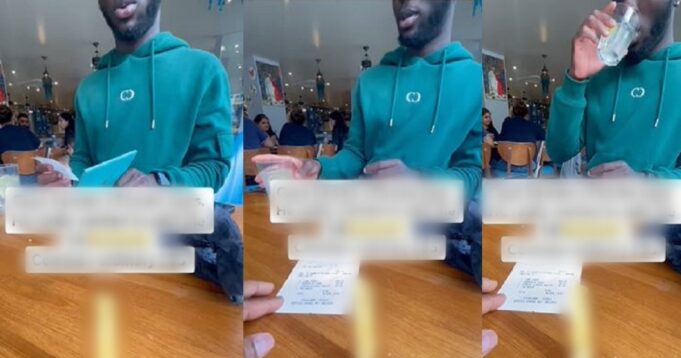 A UK-based Nigerian lady has shared her experience of a date with a man who asked that they split the bill.

The lady revealed that the young man had invited her on a date to a restaurant in the UK, where they spent a total of £40 (20,000 Naira).

In the trending clip, on seeing the bill, the man politely asks the lady how much she intends to contribute.

However, the lady maintained that since he had asked her on the date, he was responsible for covering the cost.

The young man insisted that he ordered only water, which only costs 5 pounds, and demanded payment from her for the 35-pound order of lab chops and rice.

After much back and forth, she still refused to pay, arguing that it was his responsibility to cover the expense. He then implied that she should have kissed him on the date if she expected him to pay for everything.

Sharing the video online, the young lady advised fellow ladies to be careful of broke men.

”Guys beware of broke boys, he really wanted to split the bill. Common ordinary 35”, she wrote.

Meanwhile, popular actress, Queen Nwokoye, has weighed in on the never-ending argument about going on dates and who should pay the bills.

Over the years, there has been an ongoing debate on social media, especially among Nigerians, about who should pick the tab.

Some people are of the opinion that it is the man’s responsibility to pay the bills, while others have said that the bill should be split equally or both parties should pay for what they ordered.

Queen Nwokoye has also taken to micro-blogging platform, Twitter, to share her stance on the issue. According to her, if a person ask her out on a date, the person should pay and if she was the one who invited the other person out, then she would pay.

“Don’t get it twisted. If you ask me out on a date, the bill is on you. And if i ask you out, I am paying the bill. Let’s stop confusing ourselves.”