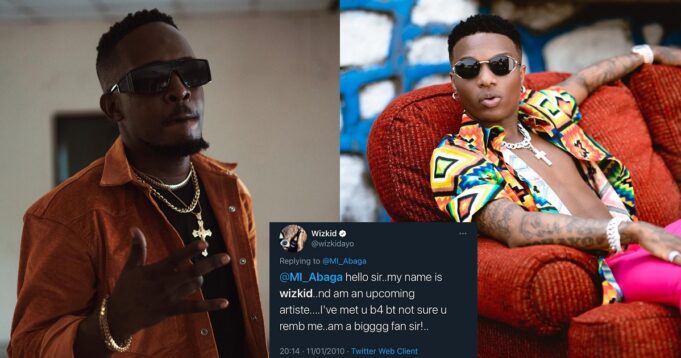 An old tweet of Grammy award winner, Wizkid trying to get the attention of Nigerian Rapper, Jude ‘MI’ Abaga has resurfaced .

In the tweet dated as far back as January, 2010, the now superstar singer introduced himself as an upcoming artiste who was a big fan of M.I at the time.

@MI_Abaga hello sir..my name is wizkid..nd am an upcoming artiste….I've met u b4 bt not sure u remb me..am a bigggg fan sir!..

11 years later, Ayodeji Ibrahim Balogun, better know as Wizkid, is now one of Africa’s biggest artists, the most decorated Nigerian artist ever, and one of the most revolutionary Afro-pop artists of the modern era.

In fact, the “Ojuelegba” crooner was recenlt featured on the Forbes ‘100 Innovations, Inventions & Icons From Africa’.

The publication described Wizkid as, ”Another one of Nigeria’s brightest and biggest stars, Wizkid, an image-maker who speaks to millennials”.