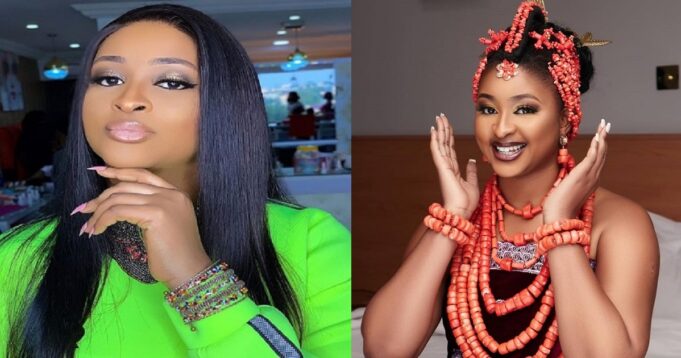 Nollywood actress, Etinosa Idemudia, has enjoined parents to train their male children as they cautiously train the females for marriage.

The mother of one who gave this advice in an Instagram post on Friday, July 15, queried the upbringing of the majority of men nowadays.

While parents spend a lot of time and effort preparing their female children for marriage, in her opinion, the males actually require more preparation for marriage.

“You people that have male children you owe us o. You owe us that have female children. Abeg train your boys. Because the kind radarada mentality I dey see for men of nowadays. Even men on Twitter. Abeg you well well. make my pikin no jam agbako”, she wrote.

“Abeg abeg abeggggggg boys need marital training twice as much as ladies these days cos what!!!!!! The things I’m hearing Omo!!! Omo x 1000”, she added.

In other news, Nigerian comedienne, Anita Asuoha popularly known as Real WarriPikin, has condemned the use of the phrase “men would always be men”.

Speaking in a video she shared on her Instagram page, the mother of two stated that the phrase has made people normalize bad characters displayed by men, all in the name of “men would always be men”.

She also pointed out that the phrase has made a lot of women suffer in their marriages because their husbands are displaying toxic characters, but won’t change because “men would always be men”.

Speaking further, she noted that parents have a lot of work to do with training their male children.