Home Viral Bride stunned after clergyman asked her to pledge her bosom will be... 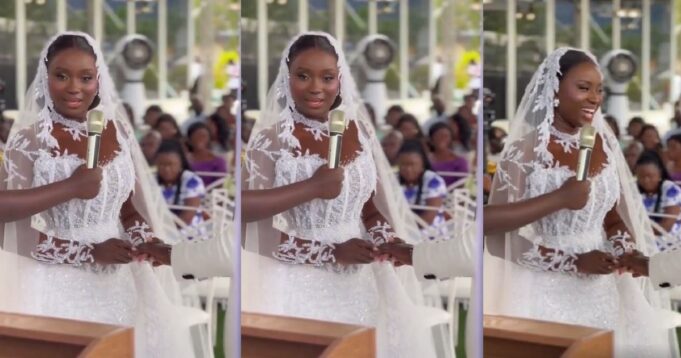 A bride taking her wedding vows has caught the attention of netizens with her reaction after the officiating priest asked her to pledge her bosom would be used to satisfy her man at all times, in a video making the rounds online.

The beautiful bride and her husband were exchanging their marital vows in church when the clergyman decided to tweak the vows.

In addition to the “for better for worse line“, the clergyman asked the bride to vow that her bosom would at all times be used to satisfy her husband, and this apparently left her stunned.

The astonished bride looked at the priest in disbelief, as if to confirm that she heard him right before taking the vow.

In other news, billionaire businessman and Politician, Prince Ned Nwoko has finally cleared the air following rumours that he had obtained a marriage list from the parents of teenage comedienne, Emmanuella.

Rumours about Ned Nwoko getting a marriage list from Emmanuella’s parents surfaced online and elicited wild reactions and some people have been itching to know it it was true or false.

However, amid the saga, curious netizens who couldn’t get over the issue decided to hear from the horse’s mouth as they stormed his comment section to ask some questions.

One of the commenters drew his attention to the rumours and in response, Ned Nwoko gave a reply that he already has beautiful Wives.

Another Instagram fan with the handle @jennifereverest24 asked the question directly to him this time as she wrote:

“The news about you and Emmanuella, is it true”

Replying, Ned Nwoko tagged it as a fake news.