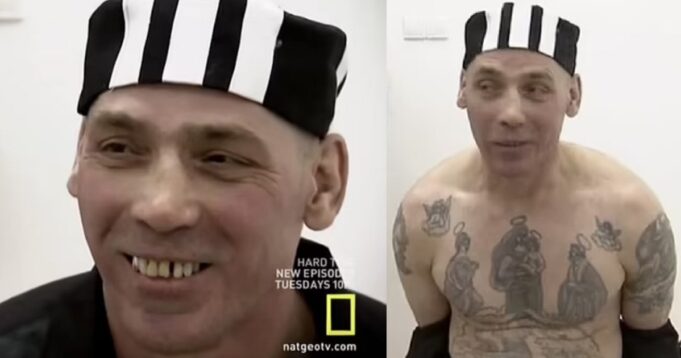 A Russian convict has in a recent interview on Nat Geo TV described the first time he ate human flesh after killing and dismembering a man.

The man whose real name is Vladimir Nikolayevich Nikolayev but dubbed ‘Vladimir the Cannibal’, was convicted of two murders in 1997 and sentenced to death but the ruling was overturned after Russia abolished capital punishment in 1999.

The 63-year-old killer who is currently serving a life sentence at the notorious K-6 Dolphin Prison, spoke with Inside Russia’s Toughest Prisons and recounted how he killed a man and ate his flesh.

‘I was coming home from a party a little drunk. And next to the door of my building another guy, also drunk, asked me for a light,’ Nikolayev said.

‘We started arguing and got into a fight. He hit me, and I hit him, and it turned out he died.’

According to him, he dragged the man to the bathroom, undressed him and stated cutting him apart.

He said he didn’t plan to eat him but decided to give it a try after the thought crossed his mind when he was dismembering the dead man.

‘All of a sudden something struck me and I thought I would try him.’

I cut off a piece of meat from his thigh and boiled it. I tried it, didn’t like it, so I chopped it up and fried it in a frying pan.’

Speaking further, he said he gifted some of the human flesh to a friend who took it home to his wife and kid, assuring him that it was kangaroo meat.

‘He took it home and gave it to his wife. She made dumplings with it, she had some herself and fed some to her children. They didn’t know what it was.’

‘I said it was kangaroo,’ Nikolayev added with a smirk. ‘We don’t have kangaroos around here. They didn’t know what it was.’

He also reportedly sold around 5kg of the meat at an open market claiming it was kangaroo meat, however, nemesis caught up with him after a woman pointed out the weird taste of the meat and took it to a doctor who examined it and revealed that it contained human blood.

After making the disturbing discovery, the doctor called the police who arrested Vladimir at his home.

The convicted killer will remain behind bars for the rest of his life on a diet of mostly soup and bread.