Home Viral “There was a caught” – Woman calls out a Twitter user for... 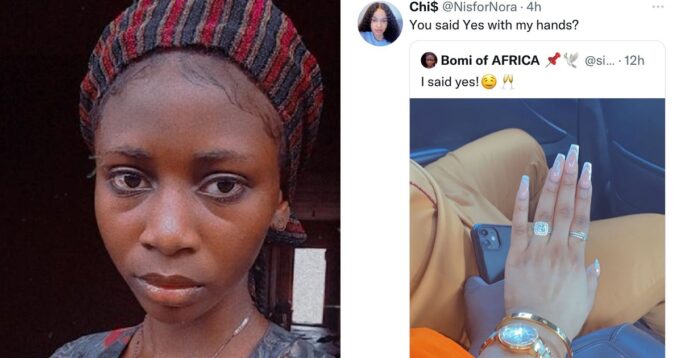 A woman has called out a female Twitter user for using a picture of her hand with engagement ring to announce her ‘engagement’.

The Twitter user, with handle @symply_bomi, had taken to the micro-blogging platform on Thursday, July 28, to share the engagment picture and reveal that she’s engaged.

After the post gained traction online, the real owner of the picture, identified as @NisforNora, spotted it and called out the lady for using her hand.

“You said yes with my hands?”, she asked.

Apparently, Nora posted the beautiful picture in which she adorned her wrists with a wristwatch and bracelet along with the diamond engagement in December 2021 to announce her own engagement.

The rather hilarious incident has sparked funny reactions from social media users as some pointed out that the lady who ‘stole’ the picture is dark in complexion and it couldn’t have been her hand in the picture.

@irediaisrael wrote, “From the profile on the handles you can see the real owner😂😂😂”

@danielladanielles wrote, “If she fit thief your hand, you need to secure your husband 😂😂😂😂😂”

@awerabenaunbreakable wrote, “Why can’t people just be real and be themselves! Gosh 😒”

@joker___ledger wrote, “OMOH , if caught Red handed was a situation 😊”