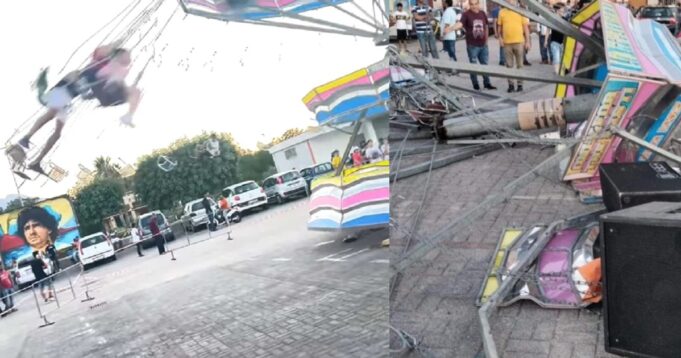 About 20 people, including children, got injured after a fairground ride collapsed in Italy, officials have said.

Families that attended a festival in Palma Campania, near Naples, had packed onto the chair swing ride on Sunday afternoon, July 10, when the accident occurred.

Footage shows the base of the ride starting to shake violently shortly after reaching maximum speed. Bystanders are heard shouting as it then begins to lift free from its safety shackles and topples over onto its side.

Parents are later seen rushing over to check on their children.

One 12-year-old remained in hospital on Wednesday, July 13, according to local media.

Detectives are investigating an individual responsible for the fairground on suspicion of causing injury through negligence by allowing the ride to suffer structural failure.

The fairground operator had earlier told local reporters it was a “miracle nobody was killed“. The ride collapsed just a few hours before the fairground was due to end, the town’s mayor said.

More than 10 people were injured, not only those who rode on the carousel, but also people who were nearby. Among them was a twelve-year-old girl. The victims were slightly injured, no serious injuries were reported.
An investigation is underway. pic.twitter.com/rTB0jv04xV