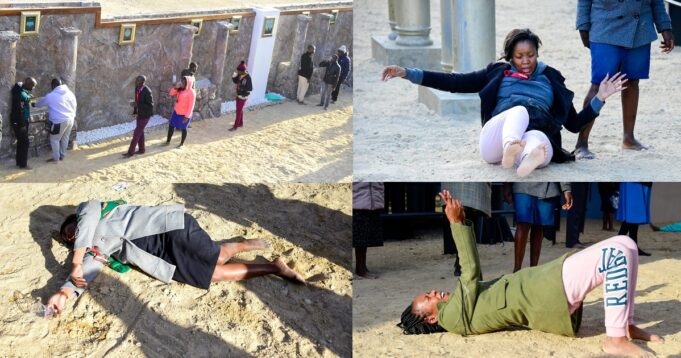 Some members of a church in Zimbabwe were pictured ‘manifesting’ after drinking from ‘anointed’ taps installed by their pastor.

The rather bizarre event took place at the Prophetic Healing and Deliverance (PHD) Ministries in Waterfalls, Harare, Zimbabwe.

According to the founder of the church, Prophet Walter Magaya, who took to Facebook to share the pictures, the taps are anointed and carry different types of anointing.

He also disclosed that the taps are part of the installations of his new walk through altar.

“There are four taps and all are anointed. You should drink from all four for they carry a different anointing and they are commissioned differently. You are welcome to drink and have your own encounter.”

At the opening service, members of his church were seen queuing to drink water from the anointed taps and afterwards, some of them were carried away in the spirit and started ‘manifesting’ in abnormal ways.

See the pictures below,

In other news, some students from Zamfara state who are currently on scholarship at the Cyprus International University have called out the state government for abandoning them in a foreign country.

One of the students who spoke in the video said they were kicked out of their dormitories by the school management because of unpaid fees and debts. Watch the video here