Home Entertainment News Comedian, Bovi shares chat he had with a scammer who asked for... 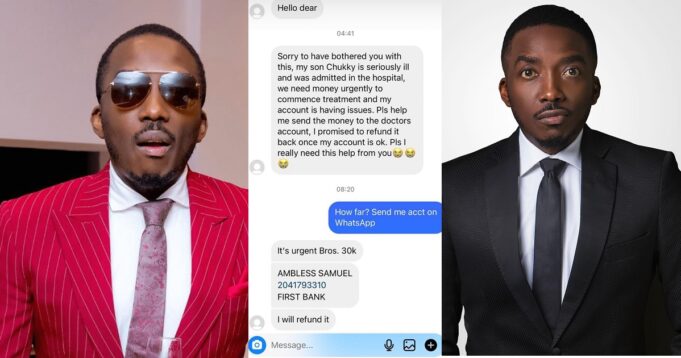 Nigerian comedian and actor, Bovi Ugboma has shared the interesting exchange he had with a scammer who posed as his former schoolmate.

The actor took to his Instastory to share screenshots of their conversation which he said was suspicious from the get go.

In the chat, the scammer who sent a message with his schoolmate’s IG account, asked for urgent 30k to sort the medical bills of her ailing son.

In response, the actor told the person to send him a message on WhatsApp to prove that it’s indeed his old schoolmate but the person claimed his/her WhatsApp account had issues.

Bovi then sent a fake credit alert to the scammer as proof of the transfer. However, the scammer who didn’t get the payment because it was obviously fake, got angry and tackled the actor for tricking him.

Things went downhill from there and they threw insults at each other, then Bovi revealed that he has reported the scammer’s bank account and he would be arrested if he makes any attempt to go to the bank.

The 42-year-old comic actor then disclosed that his old schoolmate’s IG account was hacked by the scammer who had been using it to defraud unsuspecting people.

Read the exchange below,