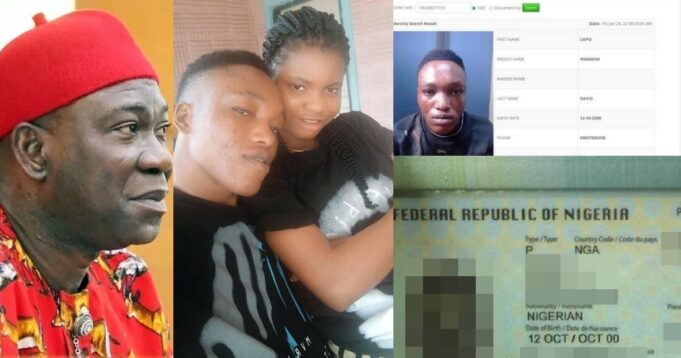 Following the discovery of the document that unveils that the organ donor involved in the Ekweremadu saga, was born on 12th of October, 2000, more details about him have been uncovered.

The young man identified as Ukpo David is purportedly over 21 years old and this corresponds with the claim on his visa application.

His Facebook profile which he has taken down was also uncovered and from it, it was discovered that David hails from Izzi in Ebonyi State and is already in a relationship according to his profile on the social media account.

A photo of the young man and his lover can be seen as you scroll,

David’s organ was not harvested after he truthfully disclosed his age to the doctors at the Royal Free hospital in the UK. The doctor there canceled the procedure and then he was immediately taken into the custody of the family who according to the prosecutors treated him like a slave until he escaped and found his way to the police where an investigation started, leading to the arrest of the couple.

The claim of trafficking was nullified by a letter written by Mr Ekweremadu to the British High Commission in Nigeria in support of a visa application for Ukpo David.

In the letter, Mr Ekweremadu disclosed that the applicant was travelling to the UK for medical examination to possibly donate a kidney to his daughter Sonia.

He said the examination would be carried out at the London Royal Free Hospital.

The Uxbridge Magistrate ordered Ekweremadu and his wife be remanded in custody until July 7, 2022, for the next hearing on the case.