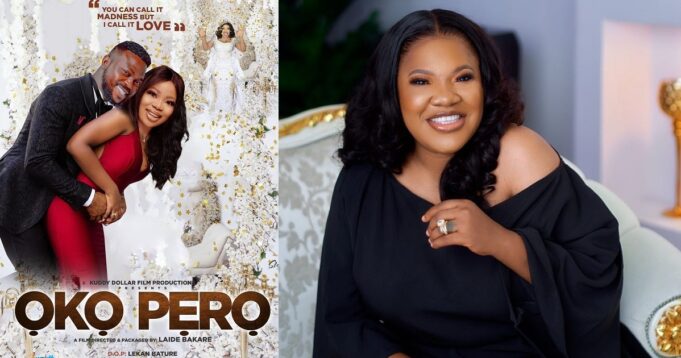 Nollywood actress Seyi Edun has angered some Nollywood fans after she struck a pose with Toyin Abraham’s husband, Kolawole Ajeyemi.

It is common knowledge that Toyin Abraham was previously married to Adeniyi Johnson, but due to some reasons, the marriage failed and Johnson later got married to Seyi.

Now, a new photo of Seyi Edun with Toyin Abraham’s second husband has got people talking:

mhizzsuzzy wrote ; Aunty Toyin there’s 🔥 on the mountain oooo, dnt allow anyone to snatch brother kola from u oooo

Ademi wrote ; “This is absolutely nonsense. Abeg oo. Make Dem no snatch husband again. Please respect our world best and pull this down right away. Mtcheeew”

Olayemi wrote ; “I don’t like this poster because I don’t want Toyin to be hurt again”

Ada wrote ; “Toyin bi mumu sha. Why she go let her husband do this kain pose with her former husband snatcher. If she snatch this one again, na she sabi o”