Home Entertainment News “Don’t drag your wife to an uncomfortable apology, she wasn’t called when... 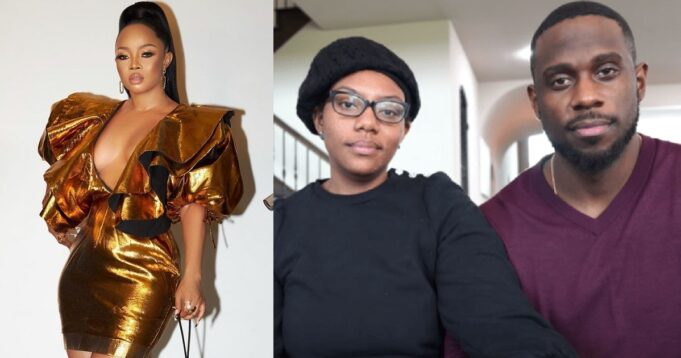 Media personality, Toke Makinwa has reacted to the video of relationship expert, Derrick Jackson, admitting to cheating on his wife with other women.

Derrick Jackson, who is a renowned relationship guidance advisor, had initially denied having an extra-marital affair when a woman came out to reveal their sexual frivolities.

However, Derrick has countered his earlier claims as he released a video admitting to cheating on his wife.

His wife, Da’Naia Jackson, was also present in the video and he held her hands while admitting to infidelity.

He said in part, “Derrick Jaxn was involved with other women outside the marriage. I’m talking about as serious as sex to sexual flirtation and meeting up and that kind of thing.”

The video has sparked outrage on social media as some viewers opined that it was additional torture for his wife to sit with him through out the video.

Nigerian On-air personality, Toke Makinwa has also shared her two-cent on the apology video. She noted that she is not judging the man because nobody is perfect, but she advised men to stop dragging their wives into their apology videos.

She opined that since the woman wasn’t called by the man when he was cheating, therefore she should be left out of his PR stunt.