Home Entertainment News Why I dragged Real Warri Pikin, others for making videos during condolence... 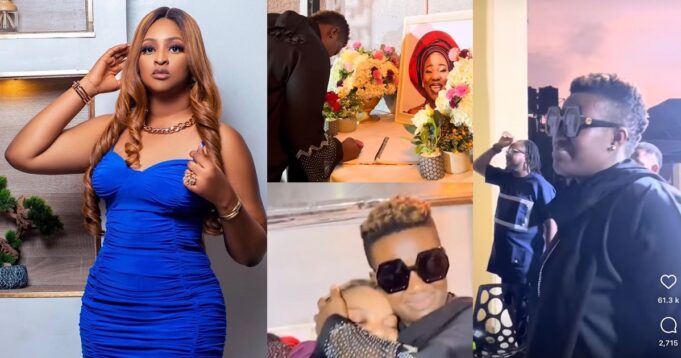 Nollywood actress, Etinosa Idemudia has revealed why she called out her colleague, Real Warri Pikin, and others over their clout-chasing condolence visit to the family of late actress, Ada Ameh.

This comes after the mother of one told her colleagues to drop their cameras at home when going for a condolence visit as it’s not every occasion that should be used as content.

She also slammed a certain celebrity who filmed her condolence visit to late Ada Ameh’s family, took time to edit and add an emotional soundtrack to it before posting it online.

It was later disclosed that she was throwing jabs at comedienne and actress, Real Warri Pikin.

“If you are really touched, If it is not just a publicity sighting for you, you will not have mind to tell your P.A hold the camera. As I’m walking in the recording. Record everybody. As she’s crying record her. Then you sat down, edited, even put soundtrack. No. It’s offensive. Clout is good for business but this one is not nice”. ICYMI

During a recent interview on TVC Connect, Etinosa disclosed why she was infuriated by the video and another one of Ada Ameh’s best friend, Empress Njamah, crying bitterly while setting up the condolence registry.

According to her, she recently lost her father and understands the pain of losing a loved one and it would have been nerve-wracking to see people making a video instead of consoling her grieving family.

She added that she doesn’t understand the kind of people in this generation because if anyone is truly heartbroken by the death of a friend or family, filming a video for social media validation would be the last thing on their minds.

She said in part,

“I lost my dad not long ago, when u saw the video of someone going to – I first saw a video of Empress crying placing the pictures and flowers and I was like why is anybody recording this lady in this vulnerable moment and in the video there were other people with phones I could see. What kind of generation is this? What kind of people are this? All holding phones, when they could be consoling her. That triggered me. I saw another video, someone walking into the place of condolence, there is a camera following the person, like if this person means a lot to you and you are pained about her transition to glory there is no way you would remember someone to take you”.