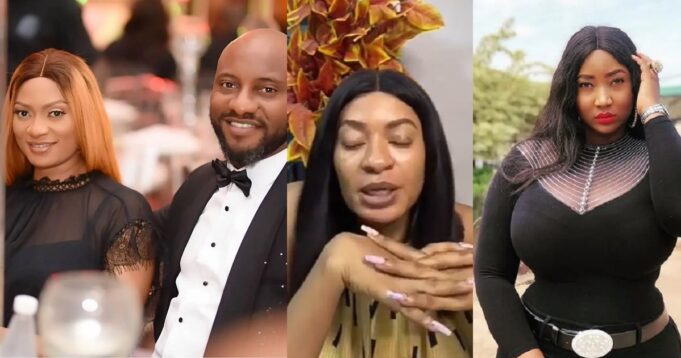 Controversial actor Yul Edochie’s first wife, May, has revealed that she fell into depression after her husband took a second wife.

Recall that Yul Edochie, who had been married to May for more than seventeen years, shocked everyone in April 2022 when he announced his marriage to actress Judy Austin.

At the time, May did not hesitate to express her displeasure with Yul’s marriage to Judy as she took to the comment section of the post to call on the judgement of God on her husband and his new wife.

May, on the other hand, received the support of Nigerians online, who have continued to denigrate Yul and take advantage of any chance to drag his second wife, Judy.

However May, during a recent Facebook live session with actress Chioma, recounted how she battled a terrible depression following the news, but thankfully she survived and has now gotten over it.

The mother of four noted that rather than dwelling in depression, she braced herself up and moved on.

“Some people are saying May is using this to cash out. I don’t wish this against my enemy. Depression is real. And there are different stages of depression. For me, rather than dwell in depression, I decided to pick the pieces of the beautiful world I had, a very beautiful world that I had.”

“An amazing family that suddenly shattered and I decided to pick up the pieces and try to move on rather than dwell in depression. It has not been easy. I’m glad that I look happy and appear strong.”

“I’m glad that I have been able to go out there and do stuff. It is because of the love and support from my family and you guys. The love has been massive. These are the things that have kept me going.” She said.