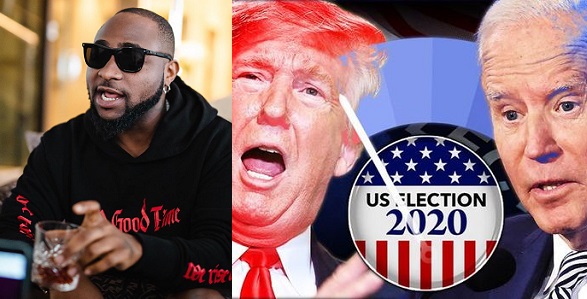 Music sensation, David Adeleke, professionally known as Davido has reacted to the ongoing elections in the United States.

Davido who took to his Twitter page to react to the ongoing elections, stated that the pressure and anxiousness that comes unto a presidential candidate during elections can increase the candidates blood pressure than normal.

“Election can give somebody HIGH BP #USElection2020”

However, controversial journalist, Kemi Olunloyo has said she will support sensational singers, Falz and Davido if they run for presidency.

According to Kemi Olunloyo, young people under 55 years of age should be president come 2023. She has however urged Nigerians to vote their youth president just like they voted for Big Brother Naija season 5 winner, Laycon and not be biased about tribal differences.

“If Falz and Davido float their own party and run for office in a presidential ticket, I will support them. Young people under 55 should be leading Nigeria at all costs in 2023. You vote like you did for Laycon. Even Yakubu at Inec can’t touch this. No more tribal zoning shit.”