Home Entertainment News Erica thrills fans as video of her giving perfect rendition of a... 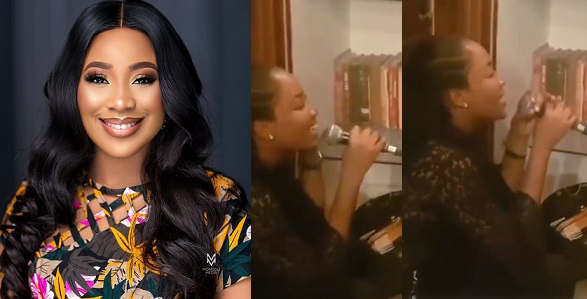 Former Big Brother Naija housemate and actress, Erica Nlewedim has left her fans thrilled, after a video of her giving a perfect rendition of a gospel song surfaced online.

The reality star, asides being a talented actress and model, has proven that she’s indeed multi talented as she shows fans another part of her they never knew existed, by perfectly performing a gospel song with her melodious voice.

In the now-viral video, Erica could be seen next to an organist giving a perfect rendition of the gospel song.

Icons are busy fighting nomination for Laycon while Erica has won the next rated category already.. see voice nau

However, many fans of the BBNaija star has taken to social media, to shower encomium on her, as they commend her talents and sweet-sounding voice.

“No doubt she get nice vocals…..there are a lot of people that have nice vocals but are not known to the public cos they have no effective platform to boost their identity. So I would like for Erica to use her celebrity platform to showcase her singing talent. That’ll be nice”.

“Who cud have thought tht this fav of mine is a Singer too, Every good thing she does is so Effortless Glowing star Glowing star
#QueenErica #MultiTalentedErica“