Home Entertainment News “I love the fact that she gives me money” – Toyin Lawani’s... 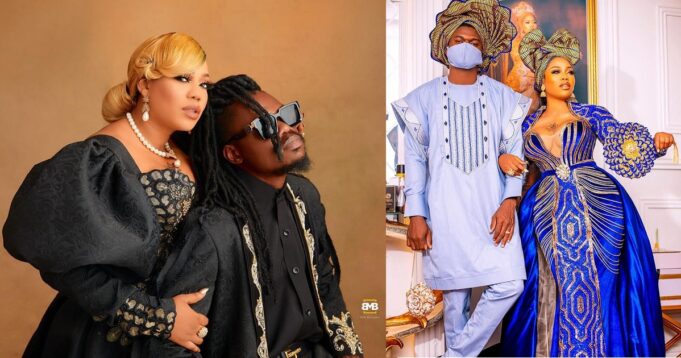 Nigerian celebrity stylist, Toyin Lawani and her photographer husband, Segun Wealth, have opened up on the dynamics of their marriage.

The couple who celebrated their one-year wedding anniversary in June, granted an interview with Pulse Tv where they spoke about their marriage on screen for the first time.

The power couple, who seem to have a fun and humour-filled marriage, answered some questions pertaining to their life as a couple.

However, the highlight of the interview was when Segun was asked to list three things he loves about his wife and he said he loves the fact that she gives him money.

Toyin, a successful fashion designer, seemed uncomfortable with his response and quickly watered down his statement by saying her husband rarely asks her for money and she doesn’t want people to push the narrative that he married her for her money.

According to her, Segun is the only guy she has dated/married who wasn’t interested in her because of her money and he only asks for money when he has expended all his options

Read an excerpt from the interview below,

“Toyin Lawani: What do you love the most about our relationship?

Segun Wealth: 3 things that I love is that one, the relationship isn’t getting old, we do everything together and lastly, you give me money.

Segun: I like that you bring a lot of money

Toyin: They would now say it’s because of money u married her

Segun: What’s my concern. Don’t you give me money?

Toyin: Egbami o Sugar Mummy!
What I love about our relationship is that you are one of the people that I have dated that I know isn’t after my money, even when you need something, you literally kill yourself before you ask me for that thing. You never take advantage of me. Times that I will leave 20m in your account, I will come back and meet it there. You will need money for yourself, you wouldn’t even touch it.”