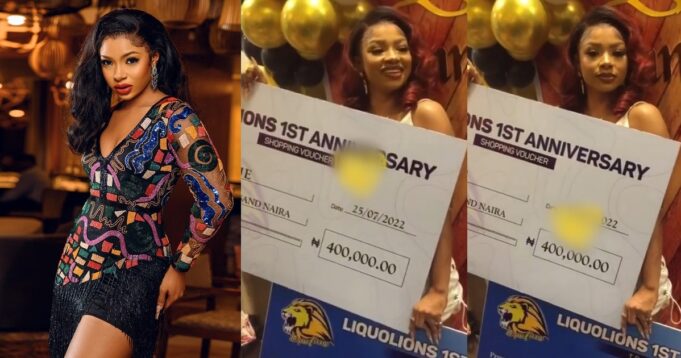 Fans of Big Brother Naija star, Roseline Afije popularly known as Liquorose, has gifted her a whooping sum of N400k and an all-expense paid trip to any country of her choice to mark her first BBNaija anniversary.

July 25 made it exactly one year since she was introduced on the sixth edition of the reality TV show and her staunch fans decided to celebrate the milestone this year.

A video showing the moment she was presented with the cheque of N400,000 and an all-expense trip has been shared online.

It’s no longer news that fans’ favourite Big Brother Naija season 6 couple Emmanuel and Liquorose are no longer an item.

In last night’s episode of the reunion show, the pair, whose relationship turned sour months after they left the Big Brother house, revealed what led to their split.

Recall that it was earlier reported that Liquorose said she walked into Emmanuel with a woman during their trip to Dubai.

Giving a detailed account of what transpired, Liquorose said she had gone to Emmanuel’s room with the intention of surprising him with food as they were chatting on her way to the room. However, on getting to the door, she kept knocking with no response. She said that after over 15 minutes of waiting, she called Emmanuel to tell him she was at the door. He requested that they meet in her room later.

Liquorose noted that she insisted it was an emergency, so Emmanuel came to open the door and she walked in and met a masked lady in the room.

“We were dating, right? And I walked into you and a girl in Dubai. The light was off, the music was playing, the bed was rough, and the girl was sitting at the edge, and she covered her face with a face mask”. She said in part.

Emmanuel, in his defense, claimed that the woman was a friend who had come to see him. Watch here