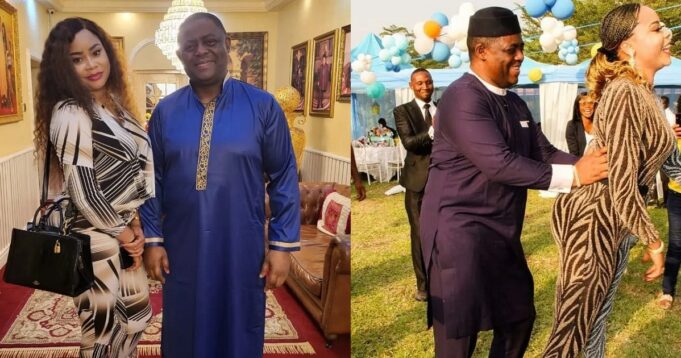 Popular media personality, Dele Momodu, has revealed that there are reconciliation moves between former aviation minister, Femi Fani-Kayode, and his estranged wife, Precious.

It would be recalled that Femi Fani-Kayode recently reunited with his estranged wife, Precious Chikwendu, after months of a tempestuous custody battle for their four sons.

Precious had severally accused the former Aviation Minister of keeping their children away from her and threatening her with his power and influence.

Meanwhile, in February 2022, she was reportedly arraigned at the Federal High Court, Abuja, before Justice Inyang Ekwo over an allegation of attempting to kill FFK with a kitchen knife on November 24, 2018. Read here.

Well, it appears FFK and precious are finally willing to let bygones be bygones and let peace reign, as revealed by Dele Momomodu in an Instagram post on Sunday, July 3.

Sharing photos of the pair on his Instagram page, Momodu revealed that FFK loves his ex-wife, Precious and there are now reconciliation moves between them.

“BLESSED ARE THE PEACEMAKERS… I just got off the phone with my dear friend and Brother CHIEF FEMI FANI-KAYODE and was happy to learn of reconciliation moves between him and his enstranged wife PRECIOUS. Indeed there’s nothing GOD cannot do… I had tried so much to intervene after PRECIOUS contacted me about a year ago but both parties refused to back down… I pray for the sake of their lovely children, they will allow peace to reign permanently… FEMI truly loves her”.