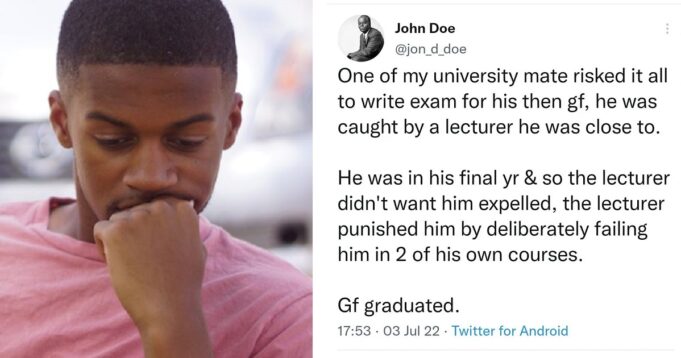 A Twitter user has shared a heartbreaking story of how a man’s life fell apart after he was caught writing an exam for his girlfriend at the university.

The Twitter user identified as John Doe said the young man in question was a final year student when he was caught by an invigilator taking an exam for his lover.

He was lucky that the lecturer who caught him knew him; as a result, instead of expulsion, he made sure to fail him in two required courses as punishment for his actions, which gained him two extra years in school.

Meanwhile, his girlfriend graduated and quickly moved on, leaving him struggling to graduate.

She went for the compulsory national youth service, got married and traveled to the Seychelles for her honeymoon.

”One of my university mate risked it all to write exam for his then gf, he was caught by a lecturer he was close to. He was in his final yr & so the lecturer didn’t want him expelled, the lecturer punished him by deliberately failing him in 2 of his own courses. Gf graduated.