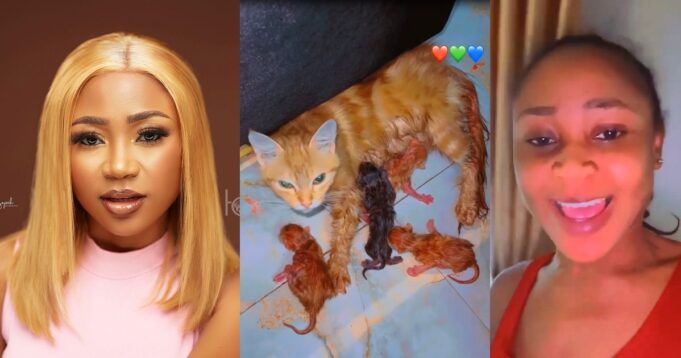 Controversial Ghanaian actress and video vixen, Akuapem Poloo, has used her cat as a point of contact to pregnant women in labour.

This comes after the actress’ cat gave birth to four kittens with ease and without any human assistance on Monday, July 4.

Akuapem took to her Instagram page to share a video of her cat and it’s newborn kittens and praised it for being a “strong woman” due to it’s resilience during labor.

The mother of one then used the cat as a point of contact to every pregnant woman in labour and prayed for them to also give birth with ease like her cat.

A while ago, Akuapem Poloo was sent back to jail after her appeal challenging her 90-day custodial sentence was dismissed by a High Court sitting in Accra, Ghana.

Recall that in April 2021, the mother of one was convicted for posing naked with her child in 2020 and sentenced to 90 days (3 months) imprisonment. However after tons of netizens signed petition requesting her release, and her lawyers filed for an appeal, she was granted bail pending the determination of the appeal.

In a recent development, a ruling on Wednesday, December 1, 2021, the Criminal Division of the court presided over by Justice Ruby Aryeetey dismissed the appeal filed by the actress.

Justice Ruby Aryeetey ordered that Akuapem Poloo’s son should be given to any competent person in the family to take care of him, while his mother serves her sentence at the Nsawam Prison.

Moments after the court sitting, the actress penned an emotional note to her son on her Instagram page.

“SON I LOVE YOU AND GOD IS WITH YOU ALWAYS YOU KNOW 💋💋💋💋💋💋BE GOOD TILL MUMMY COMES BACK 🙏 GOD IS IN CONTROL ALWAYS”. She wrote.