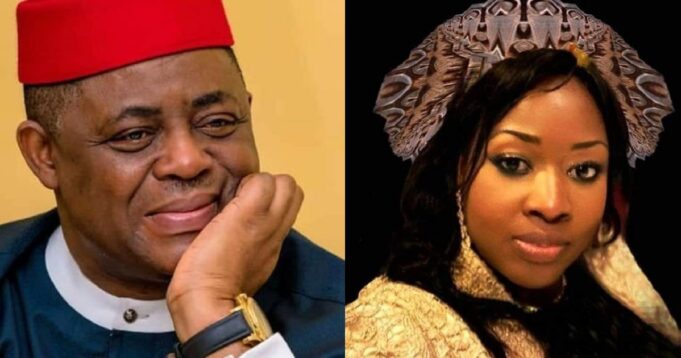 Former Minister of Aviation, Femi Fani-Kayode, has taken to social media to shower encomiums on his first wife.

The politician shared photos of his first wife on his Instagram page and praised her with endearing words on Monday, July 4.

He described her as his pillar of support, the pinnacle of his existence, and the source of his courage and hope.

“My love: yesterday, today and forever. My most senior and most respected wife: now and always. My strength: who gives me hope, courage and strength. My light: the mother of my youngest daughter and the glory of my life. ❤❤❤”. He wrote.

This comes only hours after he met with his ex-wife, Precious Chikwendu, in his Abuja home.

It would be recalled that Femi Fani-Kayode recently reunited with his estranged wife, Precious Chikwendu, after months of a tempestuous custody battle for their four sons.

Precious had severally accused the former Aviation Minister of keeping their children away from her and threatening her with his power and influence.

In February 2022 she was reportedly arraigned at the Federal High Court, Abuja, before Justice Inyang Ekwo over an allegation of attempting to kill FFK with a kitchen knife on November 24, 2018.

Well, it appears FFK and precious are finally willing to let bygones be bygones and let peace reign, as revealed by Dele Momomodu in an Instagram post on Sunday, July 3.

Sharing photos of the pair on his Instagram page, Momodu revealed that FFK loves his ex-wife, Precious and there are now reconciliation moves between them.