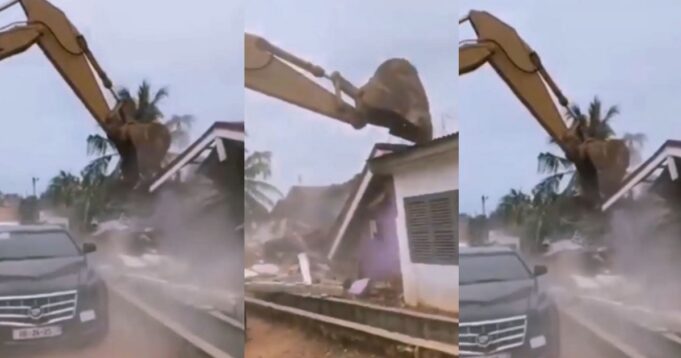 A Ghanaian clergywoman has been captured on video praying for divine intervention as a government task force demolishes her church for reportedly operating without a permit.

The woman in the viral video has been identified as the pastor of Apostolic Movers and Shakers Chapel.

The church building was demolished by a combined team of police and Accra Metropolitan Assembly (AMA) task force on Monday, August 1, 2022, after it had been marked for demolition following an earlier warning by AMA to the church that they should vacate the premises.

In the viral video, the woman is heard fervently pleading with God to intervene, saying that anyone involved in the demolition will pay with their lives.

She further stated that if God did nothing about the situation, then she wouldn’t serve him ever again.

The clip stirred quite a number of reactions from netizens, see some comments as you scroll.

@murainaakeemolatunji, “Why God of Israel… God of Ghana is nearer !!!😂😂😂”.

@top_secret_4_u, “3nkosi hweee! God is not stupid, the right thing must be done at the right time and at the wrong place so stop attributing everything to God”.

@jibril.rilwan.7, “If you said, you won’t serve God cos he didn’t give you what you want at a moment then you are not even worthy to be a good servant let alone woman of God”.