Home Viral Groom lost in thought as his bride shows off her dance skill... 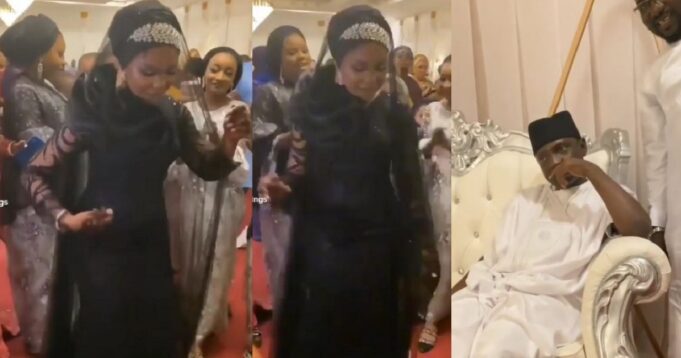 A video of a Nigerian groom lost in thought as his bride showed off incredible dance moves at their wedding reception has stirred hilarious reactions.

In the video that has gone viral after it was shared online, the happy bride who donned a black dress was joyfully dancing towards her husband while being accompanied by her friends, but the groom seemed to be ‘far away’, as he was lost in thought.

The groom appeared deeply engrossed in his thoughts and not paying attention to his dancing bride.

The video stirred hilarious reactions on social media, with many suggesting that he was thinking about debts to be paid after the wedding. See some comments below,

@acl_clothier, “He is trying to remember how many times she told him she can’t dance. 😂😂”

@airsay_berry, “This man obviously borrowed money to marry just for the guests to be spraying #10 notes..HA!😂😂”.

@m.m.a_j, “The man na Muslim…he is thinking out loud…he will be like Hope this woman still remember we are Muslims…Hope this dancing step will please Allah🤦‍♀️”.

@officialredy, “Wait is that 5 Naira notes on the ground he reach to lost in thought 😂😂”.