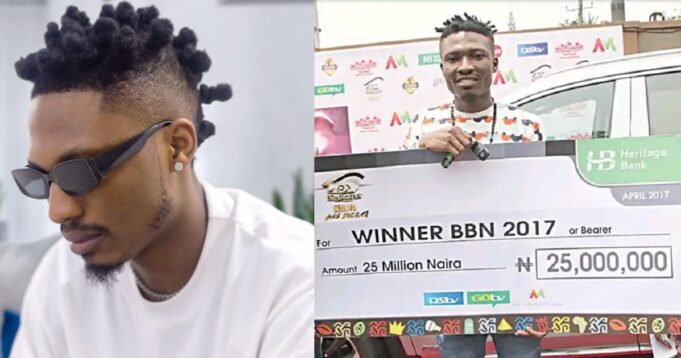 Nigerian singer, Efe Ejeba, who emerged winner of Big Brother Naija season 2 in 2017, has for the first time reacted to rumours that he squandered his winnings.

The Delta State-born rapper won the second season of the continent’s biggest reality show and walked away with a N25 million grand prize. However, shortly after rumors circulated that Efe had squandered the prize money.

In an interview with media personality Chude Jideonwo, Efe dispelled the reports as false.

According to him, contrary to viral reports, he did not squander the money, but invested it.

He noted that, contrary to speculations, he invested the entire N25 million (twenty-five million naira), although he did not give further details.

“I invested the whole money I did not even buy one shirt with that money”, he said in part.

A while ago, Efe denied claims of being blacklisted by Big Brother Naija organizers after he won the reality show.

News made rounds recently that the BBNaija season 2 winner was blacklisted by Multichoice because he allegedly disrespected their head. According to Nigerian media personality, Noble Igwe, Efe sat in his car and asked for the head of Multichoice to meet him before he comes out.

It was also alleged that Efe has apologized and tried to make amends but he was still shut out by Multichoice.

Efe has now come out to address the claims in a statement he released on his Instagram page.

He wrote in part, “I was brought up in a family and society where respect to fellow human beings is highly valued and respect to elders is unquestionable. Unnecessary ego boosting protocols or feeling of too much importance have never been attractive to me given my humble background.

Therefore, it is unimaginable for someone to conceive such character from me as a person and create a scenario that never existed. Hence, I’m clearly stating that the instance (Scenario) asserted that is making rounds in the media and public is false and never happened nor occurred.”