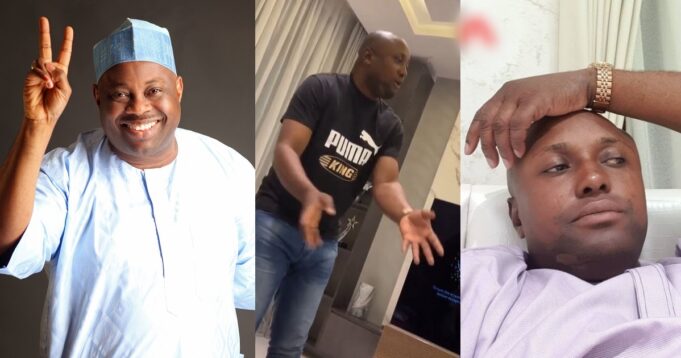 Nigerian singer, Davido’s personal logistics manager, Isreal Afeare, popularly known as Isreal DMW, has recounted an encounter he had with popular media personality, Dele Momodu, in 2007, where the latter accused him of stealing.

Isreal DMW, who was narrating the experience to his boss, Davido and some other people present, said he was opportune to meet the journalist, Dele Momodu at billionaire, Aliko Dangote’s party in 2007.

According to him, after the party, Dele Momodu realized his phone had been stolen and suspected Israel of having taken it.

Israel said Momodu took him somewhere private for a thorough search after being accused of stealing the missing phone.

He, however, noted that during the search he was proven innocent, so the journalist handed him the sum of two thousand naira and apologized for wrongfully accusing him.

In the video, which was shared on Davido’s Insta-stories, Israel recounts the incident and makes jokes about the situation.

In other news, billionaire singer, Davido’s daughter, Imade Adeleke, made news after she jokingly asked her father for the immediate sack of his logistic manager, Isreal DMW.

In a video shared by the singer, seven-year-old Imade was seeing having a dialogue with her beloved Father in the presence of Israel and she suddenly asked; Daddy why did you not fire him?

Sharing the video, Davido joked in the caption that Everybody has come to realize that “Israel no well.”