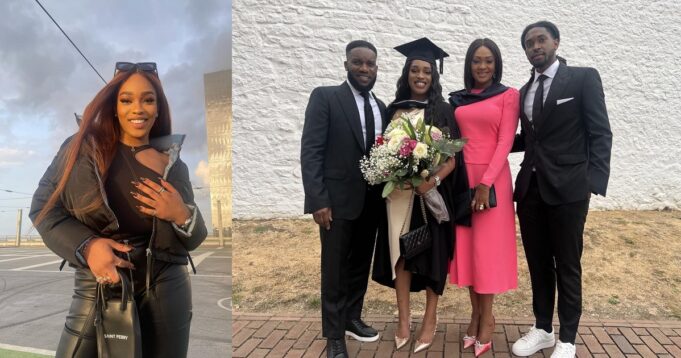 The proud father took to his Instagram page to share a lovely photo from the graduation, where he’s pictured with the rest of his family and captioned it,

”Congratulations to my darling daughter, we are so proud of you”

Daniella is the first child of the two children Jay Jay Okocha has with his wife, Nkechi.

In other news, a Nigerian lady took to Twitter to narrate how she unexpectedly received a credit alert from an unknown person but was later able to discover who it was making a few actions.

According to the lady, with handle @Cruella_D_Vel on Twitter, after she got received the alert, she waited for the person to call her but didn’t receive any call and for a moment she forgot about it until later, when she decided to search for the person on social media using the full name of the sender the alert showed.

She revealed she was able to get a hold of the person on Facebook — the person had also tried means of reaching her after erroneously crediting her account but to no avail.

As a token of appreciation, the lady then asked that @Cruella_D_Vel keep 10% of the money for herself and send her the remaining. However, @Cruella_D_Vel had already sent the total money back to her.