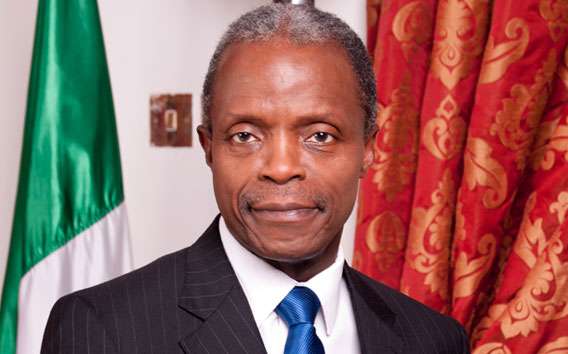 Vice-President Yemi Osinbajo, on Monday at the Harvard University, accused former President Goodluck Jonathan of not being interested in the defeat of violent Islamist group, Boko Haram, during his time in government.

Osinbajo who was delivering a lecture titled, “The unraveling of Boko Haram and the rebuilding of the North-East of Nigeria” said it was convenient for the last administration to claim that Boko Haram was sponsored by northern elite to rubbish the administration led by Jonathan, a Christian, the Punch newspapers reports.

In the statement which was released by his media office, Osinbajo said the former ruling party, the Peoples Democratic Party claimed All Progressive Congress (APC) was the political wing of the Boko Haram sect. According to him, this continued until President Muhammadu Buhari was nearly killed in an attack in Kaduna before the narrative began to subside.

He said, “As the government dithered and equivocated, BH proceeded to realise the objective of occupying territory and establishing Islamist states in Nigeria and in the Lake Chad basin.

“In Borno State alone, it occupied and hoisted its flag in 20 of the 27 Local Government Areas that constituted the state. In Adamawa State, BH took Mubi and some villages in Yobe State.”

Osinbajo said what exposed the government’s inept handling of the Boko Haram insurgency to the world was the kidnap of over 200 Chibok school girls by the sect.

He noted that since Buhari took over office, the government has approached the insurgency in the North East with renewed vigor, adding that the strongest reasons for Buhari’s victory in the March 2015 presidential election was the expectation that going by his reputation as a no-nonsense soldier, he would defeat Boko Haram and restore peace to the North-East.

According to him, Buhari was largely elected into office because people believed that he would bring to play his no-nonsense attitude toward dealing with the insurgency.