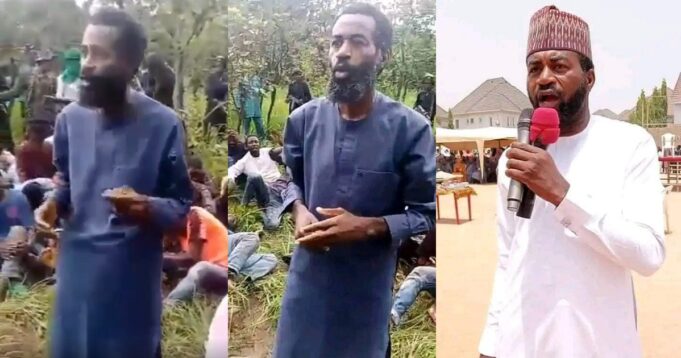 One of the abducted passengers of the ill-fated Kaduna train who spoke in a new video released by the terrorists has been identified as a lawyer named Hassan Usman.

It would be recalled that on March 28, 2022, terrorists said to be Boko Haram members attacked the Kaduna-bound train, killed some passengers and abducted others, while some lucky passengers were left unscathed.

In a new development, the terrorists have released a heart-wrenching video showing the abducted passengers being flogged with sticks while they wailed and begged for mercy.

In the video, one of the passengers who spoke on behalf of the other passengers, complained bitterly about the Federal Government’s failure to secure their release.

He also called for the help of foreign countries and international bodies to come to their rescue since the Nigerian Government have failed them.

“I am one of those involved in the train mishap. That train belonged to the Federal Republic of Nigeria. The Government has the responsibility to rescue us, but has failed,” Usman said.

“This is why we are calling on the big nations of the world such as England, America, France and the remaining international community, the likes of Saudi Arabia, to intervene in this matter with a view to finding a solution

“Truly, these people ( terrorists), their intention was not for us to even spend one week in captivity. They wanted their demands to be met so that they release us. But Nigeria showed no concern over this matter, showing no care.

“We are therefore calling on these big nations of the world, France, Saudi Arabia,England and America, the international community, ECOWAS, AU, they should please help and intervene in this matter. They should come and help us so that a solution could be reached that will enable us reunite with our families,” he added.

Just see how the Abuja-Kaduna kidnapped victims are being treated like animals and this Buhari APC led government is quite about the whole issue 😭💔..
Anybody that campaigns/Votes for APC may you and your family suffer terribly and may God punish you and your family 🙏 pic.twitter.com/wvSqO5BWcr

An acquaintance of the man, Ahmed Abdul, has taken to Facebook to reveal that the man who spoke in the video is a lawyer, named Hassan Usman.

“Below are pictures of a Nigerian lawyer, named Barrister Hassan Usman he is among the kidnaped victims. Tell me, how will you feel if this is your brother, cousin or father. I pray that the government will do the needful and have them freed.”