Home People Lady who gave boyfriend her school fees to start his business only... 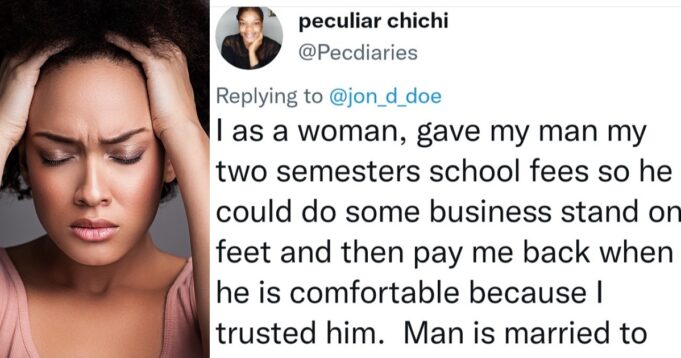 A Nigerian lady who gave her boyfriend her school fees and a part of her accommodation fee so as to help with his business, revealed that she is still suffering for her actions.

According to the lady, she was in university when she lent him the money with the agreement that he would pay back at his convenience. She revealed it was because of the trust she had for him that she went on with her action

However, the said boyfriend never paid her back and went on to marry someone else. The Abia State University student, in a series of tweets stated that because of the school fees she gave her ex-boyfriend, she is yet to graduate from school.

She shared that she gained admission in 2012 and was supposed to graduate in 2016, however, due to the school fees she didn’t pay, she was unable to get her results.

“I had to repeat some courses because nonpayment of school fees means no result,” she explained.

“I’m currently going from one lecturer’s office to another, writing letters to release my result.”

She also explained that it hurts when she sees jobs she would be good at but can’t apply for because she doesn’t have her papers yet.

“I was loyal for 5 years in that relationship. I saw him as my husband and allowed him to lead us,” she lamented.

She added that her experience has taught her to be more careful.

She wrote: “I accept my foolishness. I was indeed foolish to have entrusted my life to a man I wasn’t married to.”