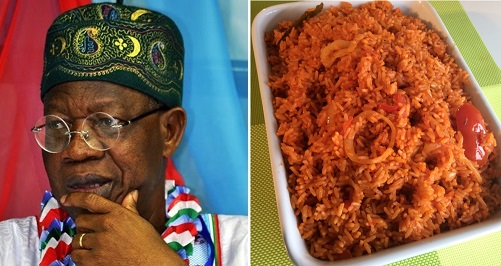 Nigerians are quite pissed with Minister of Information, Lai Mohammed after he claimed on-air that Senegal makes the best Jollof rice.

The whole drama started yesterday during his chat with CNN’s Richard Quest. Lai was asked which country he thinks prepares the best jollof rice, the Minister of Information and Culture responded, “Senegal”.

Immediately he made mention of Senegal, Nigerians were shocked to the bone marrow, because for many years, Nigerians have battled for the country’s honour, on Jollof rice, tenaciously insisting that they prepare the best jollof rice.

Now, Nigerians think Lai Mohammed is a traitor, and should be fired for treason.. They are really dragging him from limb-to-limb on Twitter.. Read some comments below:

See some of the reactions:

Lai Mohammed just said, on @richardquest that #Senegal makes the best Jollof rice. Can we fire our Minister of Information for treason!

They've taken everything away from us, now Lai Mohammed wants to take our remaining glory (jollof) and give Senegal pic.twitter.com/qhZOR99bjs

Lai Mohammed should take this two tablets each Morning & Night after eating Senegal Jollof Rice. Pls RT to send this drugs to him. pic.twitter.com/d7c8MKRzjI

Lai Mohammed needs to be thoroughly flogged for saying Senegal has the best jollof rice.

So that was how Nigerians lost the Jollof Rice🍝🍝 battle to Senegal 🇸🇳🇸🇳 who weren't even in the contest🙅🙅 . Mr Lai Mohammed, weldone sir🙇🙇 pic.twitter.com/9iElj0SRU5

On behalf of Nigerians, since Lai Mohammed is now promoting Senegal jollof, we peacefully hand him over to Senegal to be fully naturalized

Nigerians will not forgive Lai Mohammed on this. He better relocate to Senegal

Buhari you should place lai mohammed on exile. He has betrayed us. He can go to Senegal n eat their jollof. Pls we don't want him in 9ja

Did you by any chance meet someone named Lai Mohammed? I swear the guy fed you Lies. Our crook politicians won't allow anything good work.

In the season of buy Naija grow Naija, Lai Mohammed prefers to market Senegalese Jollof Rice to d world. So much 4 Culture and Information

In the season of buy Naija grow Naija, Lai Mohammed prefers to market Senegalese Jollof Rice to d world. So much 4 Culture and Information

Seeing the outrage the minister has triggered, Richard Quest quickly rose to his defence, explaining that Lai Mohammed misheard the question. Read him:

To be clear. The Minister misheard he thought I asked, who first created jollof rice – hence his (correct) answer Senegal.

Well, here’s what Nigerians think of this twist:

Oh Lord!!😂😂😂, Even Richard Quest is trying to defend our Chronic liar of a minister. LAI MOHAMMED https://t.co/InTN8rmgoq

You're trying to redeem his image. Lai Mohammed must apologize with a plate of Jollof Rice for each and every TwitterNG users. pic.twitter.com/ABrmGA7sIa

Will you stop it!!! Even me watching on TV heard U loud and clear. He even paused to think his answer & U want to do damage control? Go home

He is our minister, you don't have to defend him for us! He's either mishearing or being misheard! It never ends with Lai Mohammed!

This is how he has been mishearing since he was appointed minister. Don't defend him RQ as Senegal just won d battle on jollof via silly mtk