Home Foreign Man Chases Away His 4 Albino Children And Wife, Calls Them A... 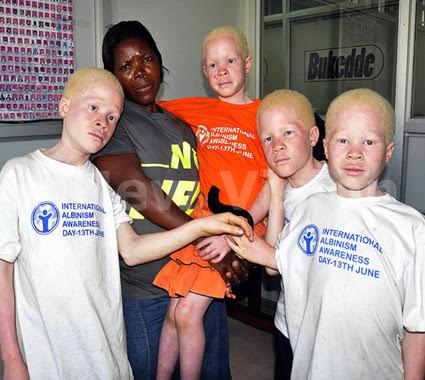 Salongo Kawuki Bwogere abandoned his wife, 35-year-old Faridah Nantumbwe and his children after she gave birth to the fourth albino child two years ago. Her told his wife that in their clan they did not produce albinos, whom he described as a curse.

He also barred his wife from cultivating on their land. Nantumbwe, now resident in Mugongo, Uganda said she used to live with her husband at Kirume village Gombolola Kasambya in Mubende district where they had their children.

She narrated that after they had the fourth child her husband chased her and vowed to kill her and the children. “Although he decided to chase me away, Bwogere never provided me with transport. He just told me to find my way out of his house. 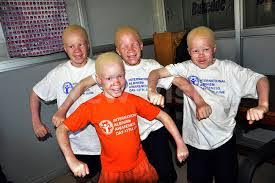 As a non-stipendiary, I had to appeal to people of good heart to bail me out of my burden of giving birth to albinos. However, through thick and thin I managed to get enough money for transport to take me to my home at Mugongo where I now live with my children,” Despite her ordeal, Nantumbwe has vowed not to abandon her children like her husband did.

She is currently seeking financial and any other assistance from people of good will, to raise her children. “After all they are human beings like other children who are not albinos”. Faridah gave birth to her first child, Ivan Ssewagudde at the age of 20. She said she was shocked to see that she had given birth to a ‘white’ child and so was her husband, little did she know what lay ahead.

Next came the twins, Allan Wasswa and Amon Kato now aged 8 years. After she had her fourth child, Joan Kizza Nakabugo, 6, her husband woke up one morning and told her to immediately leave with her children. Nantumbwe has become a case of stigma among her in-laws and the community.

They have branded her unfaithful to her husband else how did she give birth to albinos? “When I gave birth to other children of the same colour, it became worse; people in the community used to gossip about. me all the time. They considered me to be a curse. It is terrible to have children of albinism. I am terrified and I fear for them because they might develop problems as they do not have natural protection from the sun that affects them so much.

As a single mother I do not have money to provide the necessary feeding and clothing to protect them as they have tender skins. I need to monitor them constantly to make sure they do not get sun burnt. Now that the father of my children abandoned us, I appeal to all people of good will to come to my rescue because I love my children and I want to raise them.

They are lovely. I need to feed them properly and take them to school to have the necessary education, because they have the brains and they are intelligent. My husband’s family members also branded me a ‘mother of ghosts’. So I have nowhere to turn to other than to people of good will and to the Government. Nantumbwe revealed that her in-laws have a history of albinism.

According to her, before her father in-law passed away last year, he had told her that his elder brother had fathered four albino children. “He encouraged me and said not to get worried as it was hereditary in their family.” Unfortunately, he passed on before her husband chased her away.

Nantumbwe currently earns a meagre living from doing peoples’ laundry and gardening. “I feel bad my children are not going to school and sometimes we sleep without a meal or a drink. I call upon President Museveni to come to my rescue as he has always done with many other people in this country, because I am in dire need of assistance with my children.

We have nowhere to live decently,” she appealed. She is grateful to those who have assisted. 11-year-old Ssewagudde, the elder of Nantumbwe’s children is also appealing for help. “Our father abandoned us, because he does not want even to look at us. We are a curse to him. We pray God to help our mother so that she provides for us.” he said.