Home Viral Lawyer narrates how couple continued to copulate, go on dates during and... 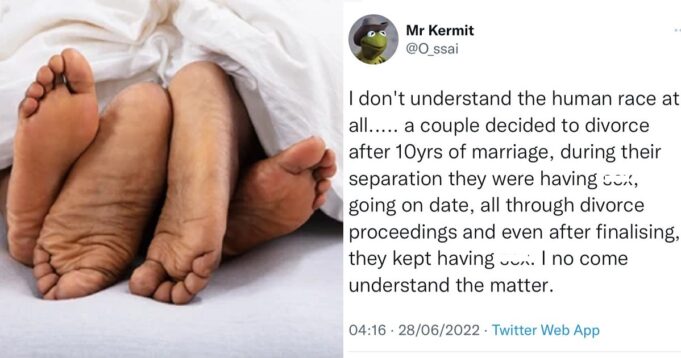 A Nigerian lawyer has narrated how a couple who decided to end their marriage after ten years of marriage maintained sexual relations through the process of their divorce and even after it was finalized.

The legal practitioner, @O_ssai, who shared his encounter with the ‘bizarre’ couple on Twitter, declared that it is difficult to understand humans.

According to him, while one would expect the couple to be estranged since they were getting a divorce, they kept going on dates and copulating all through their divorce proceedings.

“I don’t understand the human race at all….. a couple decided to divorce after 10yrs of marriage, during their separation they were having sex, going on date, all through divorce proceedings and even after finalising, they kept having sex. I no come understand the matter.” The Twitter user wrote.

The tweet, however, elicited varying reactions on the micro-blogging platform. Tweeps opined that it’s possible the couple enjoy each other’s company but are not compatible in marriage.

“You all don’t understand what commitment means, sometimes it’s hard living with someone at a point you get tired of each other when there’s no understanding. it doesn’t define every other thing that follows. They can still have sex or do whatever they like but they can’t just be together. Marriage is like forever race and it’s not an easy thing. Marriage is on it own and love is another different thing likewise every other thing that goes with it even parenting it separates from marriage. So when you’re getting married know what you are actually looking for.”