Home Viral Man writes church to ask for refund of offerings he gave from... 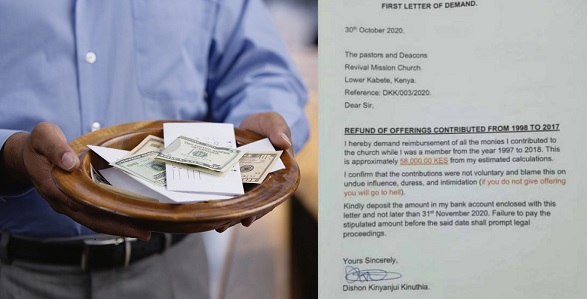 A Kenyan man identified as Dishon Kinyanjui Kinuthia has written a letter to his church, demanding a refund of offerings he gave from 1998 to 2017.

The Kenyan Christian took to Twitter to share the letter he wrote to his church, stating that there would be dire consequences if the church refuses to refund his money.

He further revealed that he was a member of the Revival Mission Church, Kabete, in Nairobi, from 1997 to 2018 when he left the church.

He asked the church to deposit the money in his account on or before November 31, 2020, or he will start legal proceedings against them.

Explaining why he wants a refund of his offering, Dishon stated that the contributions he made to the church were not “voluntary” but was done under “undue influence, duress, and intimidation.”

According to him the church is expected to refund the sum of 58,000 KES which is his estimate of his contribution to the church over two decades.