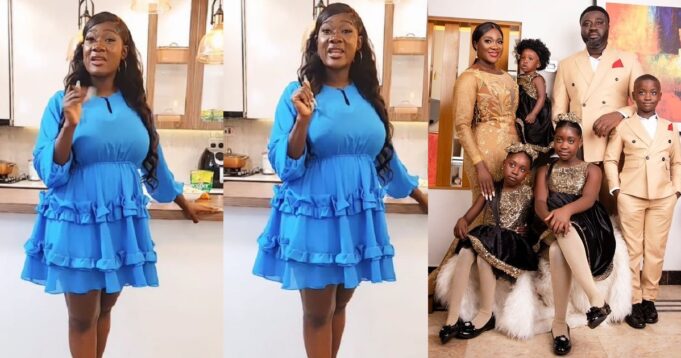 The mother of four had taken to her Instagram page to share a video of herself in a free blue dress when eagle-eyed followers claimed that they could see a growing baby bump.

Of all the comments, one Kingzuby3’s comment speculating that she’s expecting a baby body caught the actress’ attention and interestingly, she replied.

“5th child loading abi my eye dey pain me so? Hahaha…It’s gonna be a boy this time around”, He wrote.

Responding, Mercy, who did not confirm or debunk the speculation, simply wrote “Chai” with laughter emojis.

A while ago, Mercy Johnson spoke about the hardest part of being a mother.

The Thespian, in an Instagram post on Wednesday, May 4, while celebrating her daughter, Divine, as she clocked 2, said the hardest part of motherhood is when kids grow up.

According to her, no one really opens up about this part of motherhood.

“My baby will be 2 in a bit… I am happy ….No one tells you, that the hardest part of motherhood is when your kids grow up.”