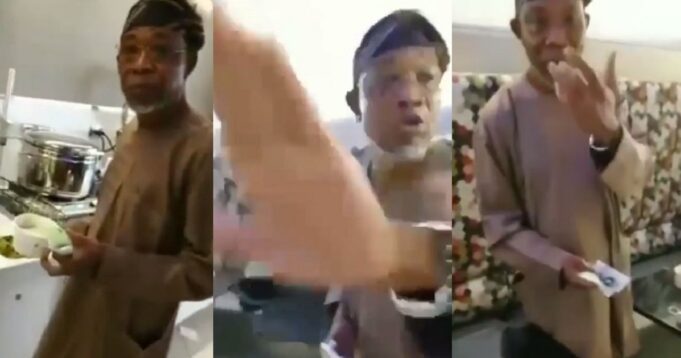 There was a mild scene at a restaurant in the US after a Nigerian man brought out his phone to record the Minister of Interior, Rauf Aregbesola, when he spotted him dining there.

In the viral clip, Aregbesola was taking his meal when the Nigerian man accosted him, asking to be sure he was Nigeria’s minister of interior and began to record him.

The minister asked who the individual was and expressed his annoyance at him for filming him without his permission.

However, the man behind the camera, who identified himself as being from Nigeria, asserted that he had every right to film the minister if he so desired.

The video has gone viral since it was shared online and has stirred varying reactions from Nigerians. See some comments as you scroll.

Reacting an Instagram user @susangold15 wrote, “I actually don’t respect him, but Respect his old age and privacy”.

@sheddi_bankz, “If you touch me I sue you.. baba respect himself. He thinks he’s in Nigeria.”

@ahunanya_hecares, “Why creating scene Mr. Minister? You are in a public place and filming you there is never an offense. All privacy is reserved in your closet in a developed country like America 🇱🇷🇱🇷”.