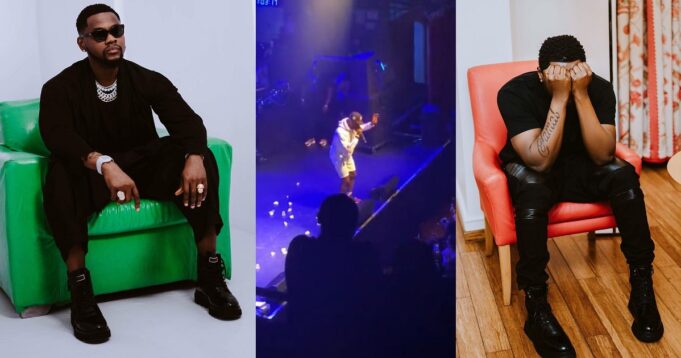 Popular Nigerian singer, Kizz Daniel, has been heavily criticized by fans after he reportedly showed up late for his concert in the US.

The Buga hitmaker, who is currently on a tour of ten cities in the United States, was five hours late for the concert last night and is said to have performed for only 30 minutes when he finally showed up.

This enraged fans who protested and in unison, asked for a refund. A video currently making the rounds showed the singer trying to cheer the audience up, but this didn’t seem to work as they continued to chant “We want a refund“.

One of the aggrieved audience took to Twitter to call the singer out, prompting a host of others to air their displeasure about the situation.

In other news, Nigerian music executive, David Adeleke, popularly known as Davido, has reacted after his colleague, Kizz Daniel, shared a cryptic post.

The singer took to Twitter to advise an unnamed individual not to fight God’s grace in his life.

Although it isn’t clear who or what Kizz Daniel was talking about, he promised to give his fans the full gist later.

“I worked for this, I’m blessed for this, don’t fight the grace of God upon my life, e dey backfire hard period, full gist later”.