Popular Nigerian crossdresser, James Brown has shared his touching childhood story and how he discovered he was an “unwanted child”.

According to him, his aunt wanted his mum to abort him. They tried all they could to terminate him but he was kept because they got a message from a prophet that his mother would die if she attempts an abortion.

The self styled princess revealed his grandmother raised him, hence, he never experienced a mother’s love and was never breastfed by his mum.

James who recalled his touching childhood story as he celebrates his birthday today, February 22nd, wrote,

“I blessed the day I was born. A leader was given brith too.
That day I was not an ordinary day. According to my grandmother 👵
The rain 🌧 was heavy the thunder ⚡️was not friendly, there was a lunar eclipse 🌑 the day become dark it was like never before my grandma 👵 was strong 💪 like an Iron Lady

Then i came to life it was the most beautiful 🤩 thing ever happened.
Everything was clear, the Lion 🦁 was joyful and there was a beautiful rainbow🌈 in the sky 🌌 then I knew I was born to be a leader ,Yes my life was heard because I am the first child 👶
I never 👎 had a mother love or care , no affection no communication, no tears 😭, no breastfeed 🤱 from a mother. But my Grandmother 👵 loves me 100%

“BUT I STILL FEEL EMPTY ➰, Writing this is not for you to make mockery of me but to understand that life doesn’t play the way you plan. My advice to you on this special day is to
Be determined, brave, smart, never 👎 take no for an answer, be pursuit take RISK never depend on anyone with all this you will get to your destination in life. EVERYTHING IS POSSIBLE IF YOU BELIEVE.” 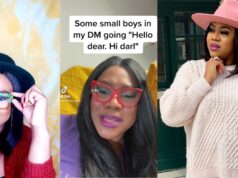