Home Viral Nigerian doctor shares chat she had with an entitled patient who called... 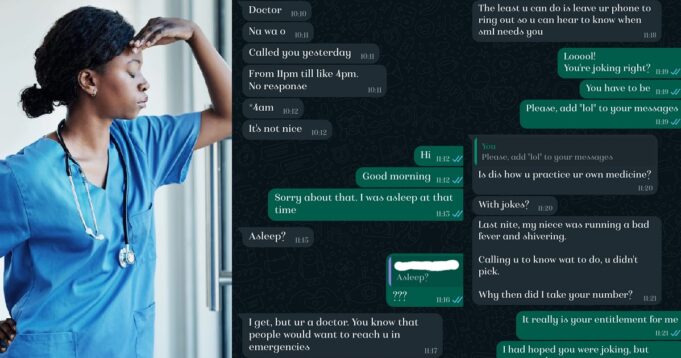 A Nigerian doctor, simply identified as Onyeka, has taken to Twitter to share the chat she had with an entitled patient who called her phone persistently for five hours in the middle of the night.

Apparently, the patient’s relative was running temperature at night and he decided to call the doctor to ask how to manage his health.

Following Onyeka’s failure to pick up, he sent her a message tackling her for not picking his call when he had an emergency situation.

In response, Onyeka said she was fast asleep at the time. However, the patient was displeased by her response and knocked her for sleeping despite knowing she is a doctor who might be needed by patients at whim.

Onyeka was infuriated by his statement and slammed him for acting so entitled and there after blocked him on the platform.

She shared screenshots of their conversation and warned her colleagues against giving their phone number to patients.

Read their convo below,

Her tweet has sparked mixed reactions from social media users.

“Expecting you to pick the call at that time is wrong, BUT, Doc, there is something called Family Doctor. I think that’s a better than your recommendations. Man clearly told you he took the number for such emergencies, and you cannot see the opportunity right before your eyes.”

“I think there is nothing wrong to share contacts with patients! I have gone out at mid nights to rescue situations and I thank God my phone rang! Let’s show empathy!”

“I’m sure if dt patient dies, u would wish u’d pickd just 2 advice on “managing d situation” till he gets to d hospital. It is d work dt u do outsde your “salary time” dat God blesses u 4. Charity isn’t by money alone. “Ibaje eniyan o da Ishe Olorun duro”. Apply dat to his attitude n urs.”

“U did not take d call.Fine, it’s understandable cus u gotta rest. But I feel ur response was a bit harsh on the patient.These are things they don’t know about. And at that situation their psychology is so messed. Train urself to manage som unnecessary criticism cus dey wil come.”