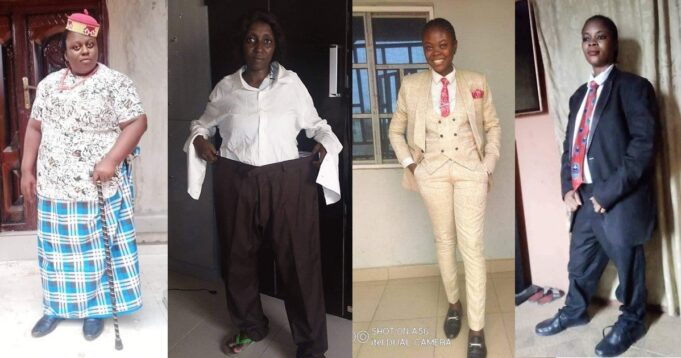 Social media users never seem to run out of ideas for online challenges and a new one has been introduced for married women.

The viral challenge was started in a closed group on Facebook after married women were asked to share photos of themselves rocking their husband’s outfit.

Before long, women started sending in pictures of them in their husband’s clothes and the submissions are hilarious.

The photos are currently making rounds on social media and have left netizens rolling on the floor laughing.

See some of the pictures below,

In other news, a clergyman has shared the purported revelation he received about a popular South African dance, Umlando, and it has gotten people talking online.

In a video trending on social media, the clergyman while preaching a sermon to the members of his church, said the popular dance step was created by demons in the pit of hell.

According to him, God took him in a vision to the marine spirit where he saw where demons create seductive dance steps and unleash them into the earth.

He said while he was in the vision, he saw the demons manufacture the South African dance step, Umlando, and unleashed it into the earth.

He added that many young ladies have hosted the demon by dancing the demonic dance step.

Meanwhile, the dance step is currently trending on video-sharing platform, TikTok, and has been performed by popular singer, Ruger, and viral TikTok sensation, Kelly.