Spokesperson for the command, DSP Asinim Butswat, who confirmed the arrest on Friday, said the suspects were nabbed during a Stop and Search Operations embarked on by operatives in Yenagoa metropolis. 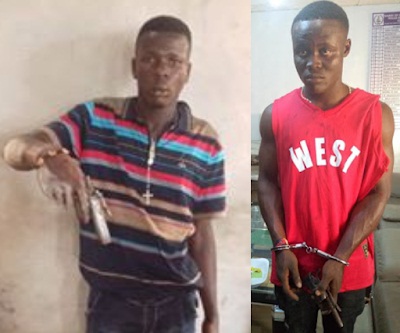 Policemen on Friday afternoon, arrested a notorious Icelanders cultist, Ayibamiebi David, 20, AKA Desperado in a tricycle along Ekeki Road, Yenagoa.

The suspect, a native of Opuama Community, Southern Ijaw LGA, he was arrested in possession of a locally made pistol.

In a similar development, on Thursday, 13 December 13, at about 1Pm, the Surveillance team of the Command Monitoring unit, acted on a tip-off and arrested one James Oweifa, 22, AKA Grade, a native of Agbere Community, Sagbama LGA.

The suspect, also a notorious Icelanders cultist was arrested in possession of a locally made revolver pistol with five rounds of 9mm live ammunition. Investigation is ongoing to arrest his cohorts.