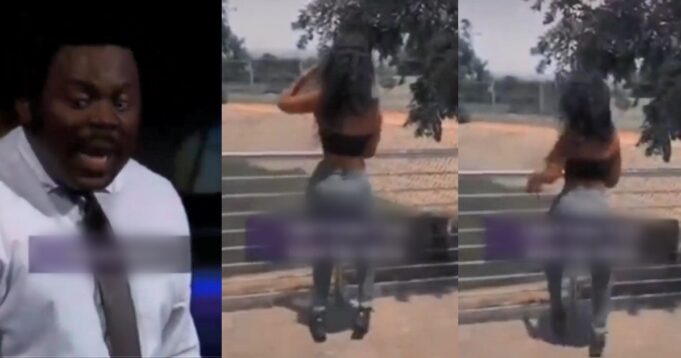 A clergyman has shared the purported revelation he received about a popular South African dance, Umlando, and it has gotten people talking online.

In a video trending on social media, the clergyman while preaching a sermon to the members of his church, said the popular dance step was created by demons in the pit of hell.

According to him, God took him in a vision to the marine spirit where he saw where demons create seductive dance steps and unleash them into the earth.

He said while he was in the vision, he saw demons manufacture the South African dance step, Umlando, and unleashed it into the earth.

He added that many young ladies have hosted the demon by dancing the demonic dance step.

Meanwhile, the dance step is currently trending on video-sharing platform, TikTok, and has been performed by popular singer, Ruger, and viral TikTok sensation, Kelly.

The pastor’s revelation has elicited mixed reactions on social media as some netizens state that they believe him, while others described his statement as balderdash.

@bgirl_nsa wrote, “I believe him! Everything starts from the spirit rhyme😢”

@dimmabailo wrote, “Only few will understand this, watch well, spirit of seduction has been released, believe it or not.its left for you to hold your self. thats why increase of lack of self control and seduction in both males and females is everywhere .HOLD YOURSELVES AND BE PLEADING FOR GOD’S MERCY.”

Another Instagram user wrote, “How are they not tired and ashamed of these fairy tales emanating from mental slavery ?…. In 2022 and this one has lost touch with reality . People should be educating their family members against these street urchins called pastors .”

@videogirl_gc wrote, “This one has ran out of words, doesn’t know what to preach again”