Billionaire heiress, Florence Otedola popularly known as DJ Cuppy has finally joined the #EndSARS protest, although from her backyard. 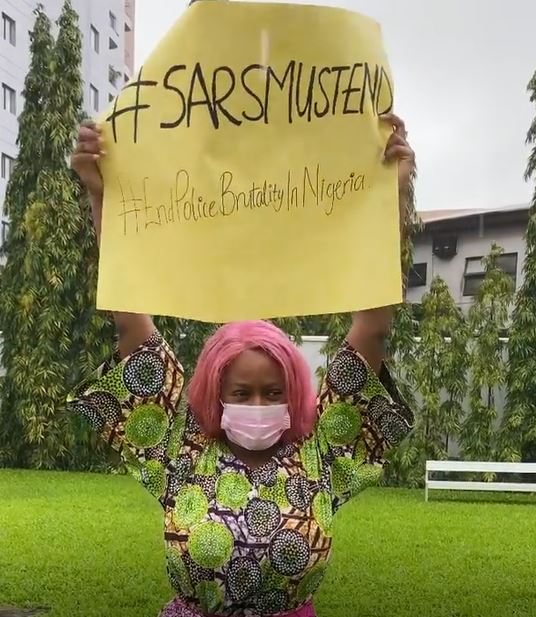 Recall that cuppy had earlier stated that she had been inspired by young Nigerians risking their lives these past days to ensure the government harkens to their voices.

“Finally able fly to Lagos and join the #EndSars protest. 🇳🇬✊🏾 …So inspired by all the young people out there risking their lives to amplify awareness. See you soon!”

The Nigerian Disc Jockey who recently got back from Dubai, revealed that despite being on self isolation, she would join the campaign against police brutality and extra judicial killings by the now disbanded unit of the Nigerian police force.

Cuppy who is on quarantine after flying a commercial plane to Dubai and back to Lagos, has staged a lone protest in her home.

It rained heavily in Lagos today and regardless of the heavy down pour, the billionaire daughter has joined several other Nigerians to call for the complete reform of the Nigerian police force.

Sharing a video from her lone protest on Instagram page she wrote, “Rain and self-isolation wont stop me”.

In the video cuppy is seen protesting in the rain, and carrying a placard that reads, “#SARSMUSTEND!! #EndpolicebrutalityinNigeria”.