Home News “Reverse Ban, Or We Bring Down Your Govt” – Beggars Warn El... 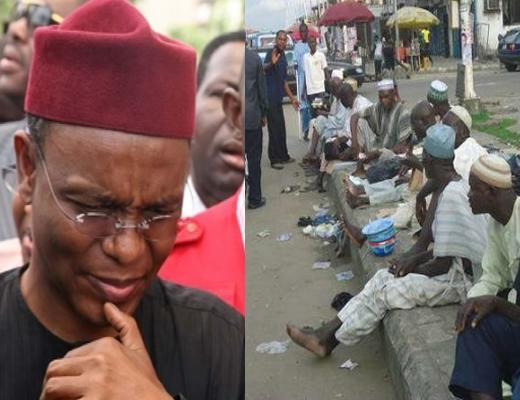 Some beggars in Kaduna state, on Monday said they had used proceeds from begging to help join the movement that produced Governor El Rufai of Kaduna State and promised to bring down his government should he insist on stopping their livelihood without providing them any alternative.

The beggars who addressed the Press in Kaduna through the leadership of Kaduna State Beggars Association said if they knew that El Rufai would stop them from begging and would show no care about their welfare afterwards, they would never have voted him in the first place.

“I want to swear on my honour that I personally used my proceeds from begging to canvass for the support of El Rufai. I used my money to mobilise for his support both on the streets and where I usually teach my students. And I am not alone in my group that made that sacrifice.

“We decided to support El Rufai, because we were tired of the then Governor, (Mukhtar Ramalan Yero) who did not show any regards to our survival. We worked hard, spent money and prayed and God heard our prayers and brought down Yero.

“Now, it would appear that we made a mistake. The new governor wants to bring us down. He does not want us to live. He has chased us out of the streets and has made no alternative arrangement for our survival.

“Look, some of us here have between three and four wives and many children. How can you lock such a man, who must resort to begging because he has found himself incapable of doing any other thing?We are asking the governor to rescind this decision now or find ways to meet our basic needs.

“If he refuses to heed to this demand, we shall make sure we bring down his government. We are not going to pray that he dies, even if he wishes us so. We are not going to say that he should be impeached, because we voted him to power. What we will do is to hand him over to the Almighty God, and we know he will remove him the same way he removed the former person. We are servants of God, and he always hear our cry”, he said.

El Rufai has always maintained that beggars and hawkers are used by terrorists, saying he had banned their activities in the state, not out of malice, but for public good.